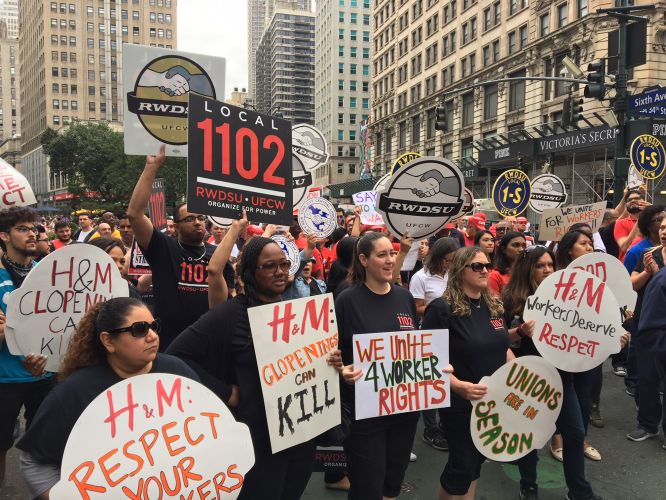 Today, with an expired contract, 1,500 unionized H&M workers at locations across Manhattan ramped up their campaign for a fair new contract. After months of negotiations, it was clear to the union that the company was not bargaining with any real intent to secure a new contract. A number of elected officials joined H&M retail professionals, who are members of Local 1102 of the Retail, Wholesale and Department Store Union (RWDSU), at the Herald Square Flagship location – the largest H&M store in the world, to rally for essential scheduling provisions that would eliminate “clopenings”, give part-time workers a minimum of 14-18 hours a week and the right to time off after five consecutive days worked, among many other fair union demands.

“Our members used to be proud to work for H&M, but their utter disregard for their workers, which we’ve seen deteriorate over months of negotiations tells a different story. Forcing low-wage workers into a schedule that can only provide poverty level wages with no ability to work a needed second job is disgusting. We cannot stand for it, we will not stand for it, and we will fight until we secure a fair new contract for the over 1,500 workers we represent at H&M,” said Alvin Ramnarain, President of Local 1102 of the RWDSU.

“When a global company such as H & M treats employees in New York worse than their employees in their home country and elsewhere around the world, they are insulting all New Yorkers. Their refusal to address serious scheduling issues is a huge mistake as well as a bad business decision. H & M wants the benefit of being in the New York market - but it is treating its New York employees as second-class workers. We will not tolerate that,” said Stuart Appelbaum, President of the Retail, Wholesale and Department Store Union (RWDSU).

“I travel over an hour to get to work everyday. When I heard that H&M wanted to reinstate a banned practice of ‘clopenings’, which would require that I get less than 5 hours of sleep a night I was outraged. Working at H&M has been a good job over the past 12 years, but if they instate these horrendous scheduling practices I won’t be able to provide for my family and I will need to seek other employment,” said Khadejiah Legrier an H&M Sales Associate.

“As Washington moves to erode our progress for workers' rights, we in New York City stand together to fight back,” said New York City Comptroller Scott M. Stringer. “New York’s workers power this city, and we will do everything we can to ensure they are treated with dignity and respect – for H&M, that means guaranteeing its workers a fair contract. Thank you to our partners at RWDSU for their tireless commitment to advancing and protecting the rights of working people in our city and across the country.

“Every worker in our City deserves to be paid well and treated well,” said Public Advocate Letitia James. “It is clear that H&M must demonstrate this basic principle by coming to the table to negotiate health benefits, work hours, and a fair contract that we demand of New York businesses. I thank RWDSU and Local 1102 for leading the fight to protect our workers and uplift our families and I strongly urge H&M to act in good faith.

“Unpredictable work schedules force workers to scramble to find child care and elder care, arrange transportation, re-schedule other jobs and cancel classes. It's unfair, unstable and catastrophic for workers and families. As the sponsor of legislation to restrict on-call scheduling and protect workers, I am proud to stand behind RWDSU workers in their fight for job stability, fair treatment and peace of mind,” said State Senator Brad Hoylman (D-Manhattan).

“As a former union organizer, I understand firsthand that it is through good faith collective bargaining that unions are able to ensure workers have access to fundamental benefits that make their time at work more productive. With access to health benefits and guaranteed work hours, workers have just a few less stresses to think about as they go about their productive day at work. It is a shame that H&M simply does not see it the same way. By failing to bargain in good faith, H&M is not only letting down their workers, but they are once again letting down families and their customers,” said State Senator Marisol Alcántara.

“New York State is one of the top 5 states with the highest number of retail sales workers. I am proud to support H&M employees and all Retail, Wholesale and Department Store Union (RWDSU) workers who want a fair contract providing fair schedules and affordable healthcare.  The strength of our entire retail workforce is only as strong as the protections of an individual retail worker’s quality of life,” said Assembly Member Rebecca A. Seawright.

Assemblyman William Colton (D-Brooklyn) says, “I stand with RWSDU and all workers in their fight to obtain fair scheduling, guaranteed work hours and health benefits. The fiber of our economy is our workers; treating them fairly is a moral obligation.” 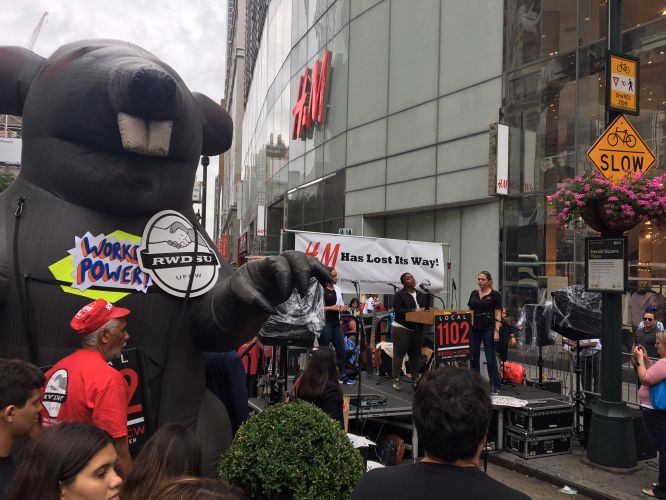 “Workers deserve access to a dependable schedule, so they can manage child care, doctors’ appointments, and even the ability to budget effectively – all things that are nearly impossible with a schedule always in flux,” said Council Member Brad Lander. “A measly eight hours guaranteed is unacceptable and leads to significant income insecurity. I stand in solidarity with union retail workers as they fight for reasonable schedules and affordable health benefits.”

H&M cannot afford to weaken a workforce so devoted to customer service, especially when the company faces greater competition in the market from new foreign fast-fashion stores opening up every day. These talented employees create a unique shopping experience for countless customers, and they play an irreplaceable role in driving the positive image, brand, and profitability of H&M as a global company. When workers are respected and empowered, they are happier on the job, and can do more to improve the shopping experience for customers, which leads to increased sales and higher profit, giving H&M an edge over competitors.

Top Five Demands of the Company by the Union Include:

The union has proposed a minimum guarantee of between 14 to18 hours per week for all part-time employees who want to work that much. But H&M has said they wish to guarantee ONLY 8 working hours per week. 8 hours barely covers worker’s subway trips, and, above all, because H&M is demanding that workers have open availability Friday through Sunday, they are essentially shutting workers out of a needed second job.

“Clopenings” must stop. The union has proposed a minimum of 10.5 hours rest time between workers closing and opening shifts. It may take a worker hours to get home at night, and then they have to turn around and return early the next morning to open the store. This does not provide for any work‐life balance, which H&M claims as one of its values.

No More Than 5 Consecutive Days Worked:

Many workers lack dental and vision insurance. The union has proposed no‐cost dental and vision insurance for all H&M employees through a Local 1102 RWDSU sponsored plan. The cost to the company is a measly $5 per person per month. H&M refuses to make this extremely minimal investment to provide workers a benefit, which will get them a free pair of glasses and up to $1,500 in dental work per year.

The Committee has proposed an additional, hourly increase of $.50 cents for senior employees who have worked at H&M for 3 years or more. The sad thing is that H&M agrees with us that veteran employees should get this money – however, they do not want to guarantee it in the contract and has demanded the ability to use their “management discretion” to give it to some people that they like, but not others.

The above proposals will cost H&M very little money and the majority of them don’t cost the company a dime. But the company just won’t make even a basic adjustment to the way they do the SCHEDULE to improve workers lives, and yet they claim to “believe in people.”