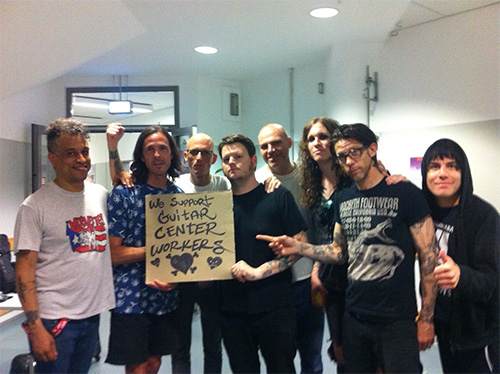 Workers at Guitar Center passionately care about helping their customers make music. Yet many workers have difficulty making ends meet on the low salaries that the company pays. Sales workers do not get sick days and doesn't offer part time workers health benefits.

So workers in New York, Chicago, Pittsburgh, and Las Vegas decided to come together and organize with the Retail, Wholesale and Department Store Union.  They are asking the company for a fair contract, but instead the company has responded by refusing to bargain in good faith and with aggressive union busting.

Now they need your help. Sign the petition below to get future action updates.

Kathleen Hanna:
I think all employees should have a living wage and the ability to organize. Only the trust-fund kids, who don't have to pound the pavement all day, end up being the ones in bands. This makes for a scene that isn't diverse or interesting.”

Anti-Flag:
We support the workers at Guitar Center in their efforts to improve their lives by coming together and we urge our fellow musicians to do the same. Unions are the reason for the weekend and the 40 hour work week. This effort for fair treatment and wages is another step on the path of progress.

Breedloves:
Solidarity! These workers are the 99% respect what they deserve! Without them you could not survive!

Paul Fonfara/Painted Saints:
We are all in this together. Faceless investment conglomerates with short sighted business practices like weaken everyone, so please stick it out and fight 'em.

Lyrically iLLz:
Imagine how much harder people will work when they're only slightly rewarded for doing what they love. Let's aim for a little more equality and respect.

Ian Mackaye:
I support the guitar center workers in their efforts to be treated not just fairly, but to be treated well. Enough with the extraction business model; leave something in the ground for others.

War On Women:
War On Women supports the fight to liveable wages for ALL workers, including the music lovers and musicians that work at Guitar Center.

Small Reactions:
We, Small Reactions from Atlanta, GA, fully support everything this petition stands for. We love Guitar Center, but it is because of the employees first. We'd love to see them treated fairly.

April and the Paradigm:
Exploitation of artists and extreme corporate greed is leading to poor customer experiences and artistic strangulation. Help us rage against this machine!!

Jason Hansen  of The Gashers
The Gashers from Las Vegas fully support the decision to unionize guitar center.