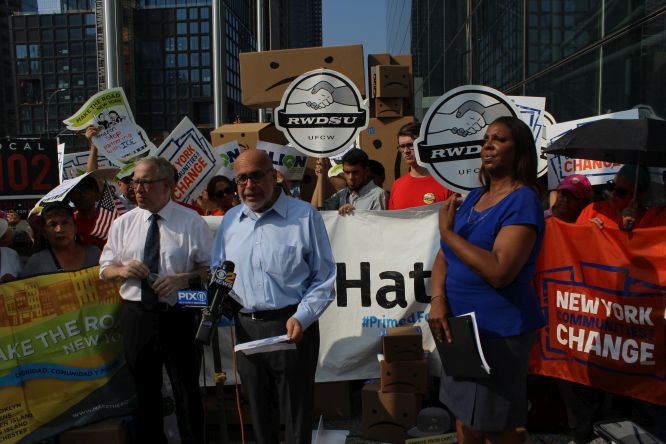 (NEW YORK, NY) – Today, the Retail, Wholesale and Department Store Union (RWDSU) and several community groups protested outside of Amazon’s Web Services Summit at New York City’s Javits Center just days after the Action Center on Race and the Economy and the Partnership for Working Families released a report entitled “Delivering Hate: How Amazon’s Platforms Are Used to Spread White Supremacy, Anti-Semitism, and Islamophobia, and How Amazon Can Stop It”. Activists paved the way for Amazon Summit attendees entering the conference with the company’s own boxes demarcating the hateful products that Amazon sells. Leaders spoke on the outrageous practice of White Supremacists using Amazon’s platform to sell hateful goods targeted at both adults and children and Amazon’s complete and total disregard for their use of their platform to do so. The group then delivered a letter to Jeff Bezos calling on him to act now (text of letter below).

“When a company knowingly allows hate groups to use their platform to sell offensive goods we cannot, and we will not stand for it. Jeff Bezos should be ashamed of himself, he should be horrified that he has given a vehicle to white supremacists to spread hate and he needs to commit to stopping it now,” said Stuart Appelbaum, President of the Retail, Wholesale and Department Store Union (RWDSU).

“In a time where we are seeing the growth of racist movements in our country, it is dangerous for the largest online retailer and distributor of e-books, Amazon to provide these groups with a platform to spread their ideas and resources to support their operations. Amazon CEO Jeff Bezos and his board of directors must take a public stand against hate and violence and stop enabling others to profit from it. Normalizing white supremacist, Islamophobic, and anti-Semitic extremists puts our communities and workers at risk. It’s time for Amazon to show which side are they on?” said Maritza Silva-Farrell Executive Director of Alliance for a Greater New York (ALIGN)

“Amazon should be utterly ashamed of itself for aiding these white supremacist merchants,” said Deborah Axt, Co-Executive Director of Make the Road New York (MRNY). “As New Yorkers and as Americans, we are disgusted by the company’s backing of hate, and today we demand action. The company must immediately stop the selling of these items on its platform and take a clear stand against hate movements across all of its platforms.”

“Jeff Bezos cannot have it both ways. He cannot claim he opposes Trump, while providing a safe haven in the online market to white supremacists and Trump supporters,” said Zack Lerner, Senior Campaign Director of New York Communities for Change (NYCC). “At a time where black and brown communities are under attack, the selling of items that promote violence are despicable. Amazon must immediately   stop letting its platform be used to sell items featuring hate symbols.”

“No business in this country should be profiting off of hate and discrimination”, said Public Advocate Letitia James. “Amazon is enabling and empowering bigotry and discrimination and must immediately reject the sale of these products on its platform.”

“In a moment of rising white nationalism and violence across the United States, it is unconscionable for any company to provide a platform for organizations to peddle their hate,” said New York City Comptroller Scott M. Stringer. “Instead of profiting from racist ideologies, Amazon must take immediate action to ensure that its marketplace is free from dangerous propaganda. I’m proud to stand with our partners in the labor and progressive movements and with fellow New Yorkers to demand Amazon do the right thing and stop putting profit over people’s lives.”

“The fact that Amazon is peddling this hateful paraphernalia is despicable. Amazon should know better and this needs to stop. I am proud to stand with the men and women of RWDSU in their campaign to bring an end to Amazon’s profiting off from hatred and bigotry,” said New York City Council Speaker Corey Johnson.

In the wake of the report by the Action Center on Race and the Economy and the Partnership for Working Families the RWDSU and community groups have been collecting signatures against Amazon. At the action on July 17, 2018 they submitted a letter to Amazon CEO Jeff Bezos calling for change. The letter reads:

Dear Jeff Bezos and Amazon Board of Directors,

While incidents of violence by individuals associated with white nationalist hate groups are on the rise, Amazon continues to be a platform for the celebration of ideologies that promote violence against black people, communities of color, LGBTQ people, women, Muslims and Jewish people. Right now, Amazon is a safe haven for those who seek to spread and profit from these hateful ideas.

A report by the Action Center on Race and the Economy and the Partnership for Working Families found that your company enables the spread of violent ideologies by allowing the sale of hate symbols and imagery on the site, including confederate and anti-Black imagery, Nazi and fascist imagery and the newly adopted imagery of the modern white nationalist movement. Some of these products are even targeted toward children. Additionally, white power and "hatecore" music is available on Amazon’s streaming platform, hate literature is available in Kindle ebooks, and known hate groups are using Amazon’s web content delivery network.

Serving as a platform for hate just to turn a profit is dangerous and unacceptable. Amazon must take a public stand against this hate and violence and take action to ensure that it is not profiting from hate or enabling others to profit from hate.

Across its platforms, Amazon has the right and responsibility to determine what it sells, publishes and helps to deliver online. Now is the time to make clear that Amazon does not support or condone the spread of white nationalist ideologies.

Now is the time to stop doing business with racist hate groups! 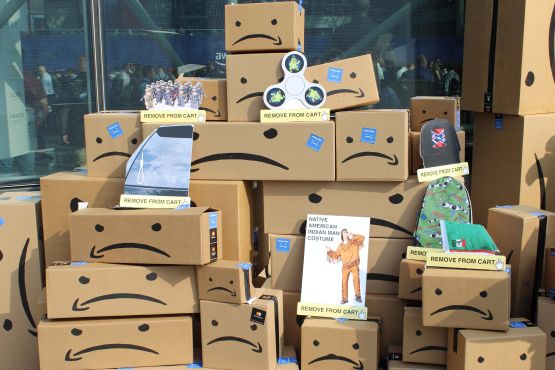 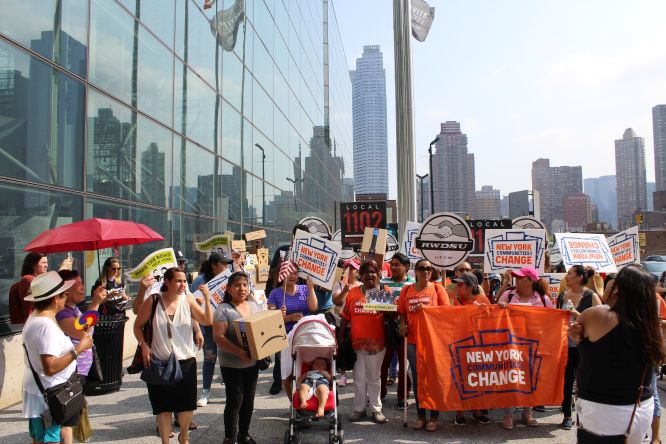