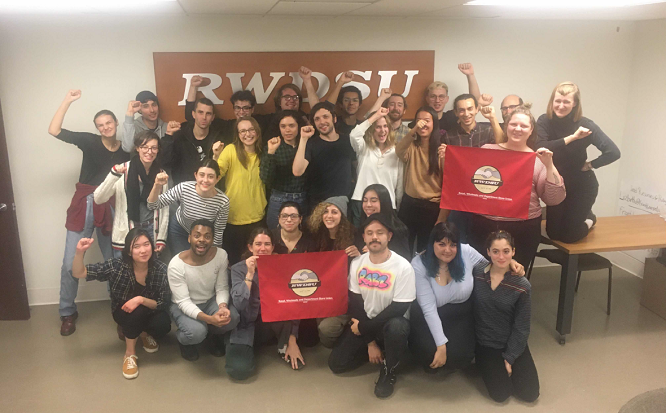 In January, RWDSU members at six McNally Jackson Bookstores in New York City ratified their first union contract after joining the RWDSU in late 2019. The RWDSU members at the stores secured strong wage increases, benefit improvements, and won the dignity, respect, and a voice on the job that comes with a union contract.

“By ratifying their first contract that addresses the many issues that motivated them to organize, McNally Jackson workers showed that the best way for working people to protect themselves and their families is to join together in a union and secure a strong contract,” said RWDSU President Stuart Appelbaum.

“We are so proud of this contract! I think our landslide ratification vote really speaks to how excited the unit is about it and how happy we are with the improvements we achieved. It feels a bit surreal that we made it happen, even while mostly over Zoom. I think we can all agree 2020 was a challenging year, but working on this contract and the solidarity with my coworkers brought me some sanity and comfort. Together we got a really stellar contract,” said McNally Jackson employee Kathryn Harper.

The vote to ratify the contract was conducted virtually on January 29. The workers in the bargaining unit handle sales, events, stocking and information services in the stores.

-Creation of three tiers for employees that recognizes skill levels and responsibilities. This provision ensures workers will be paid according to the work they do, and also creates greater creative autonomy for members to curate their particular sections of the store, which was greatly sought after by members.

-Significant wage increases for most members ranging from between 7 and 17 percent depending upon tier.

-Members, who previously had no retirement plan, can now participate in the union retirement program.

-Paid holidays will increase from 5 to 9 for all workers.

-Members with four years or more service will receive an extra week of paid vacation time.