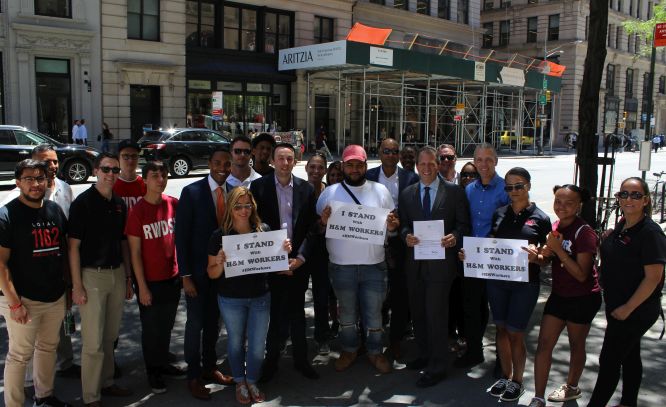 Today, with an expired contract, 1,500 unionized H&M workers at locations across Manhattan are still without a contract. After weeks of negotiations, it is clear that the company has not been bargaining with decision -makers at the table. A number of elected officials joined H&M retail professionals, who are members of Local 1102 of the Retail, Wholesale and Department Store Union (RWDSU), on a delegation visit to the H&M U.S. Headquarters to demand they come to the table. The union is seeking to negotiate a fair contract that includes essential scheduling provisions that would eliminate “clopenings”, give part-time workers a minimum of 14-18 hours a week and the right to time off after five consecutive days worked, among many other fair union demands.

Members of the New York City Council led the delegation into the building and demanded a meeting with H&M decision makers who have yet to come to the table to negotiate fairly after repeated requests by the Council. The delegation also delivered a letter signed by 28 Members urging the company to “to conclude contract negotiations that achieve fair terms of employment for your workers as soon as possible.” (Full letter attached).

“The letter from the New York City Council and their support at our delegation visit today shows how serious New York City takes fair collective bargaining. We will not back down until H&M sends decision-makers to the table. Our members used to be proud to work for H&M, but their utter disregard for their workers, which we’ve seen deteriorate over months of negotiations tells a different story. Forcing low-wage workers into a schedule that can only provide poverty level wages with no ability to work a needed second job is disgusting. We cannot stand for it, we will not stand for it, and we will fight until we secure a fair new contract for the over 1,500 workers we represent at H&M,” said Alvin Ramnarain, President of Local 1102 of the RWDSU.

“I travel over an hour to get to work everyday. When I heard that H&M wanted to reinstate a banned practice of ‘clopenings’, which would require that I get less than 5 hours of sleep a night I was outraged. Working at H&M has been a good job over the past 12 years, but if they instate these horrendous scheduling practices I won’t be able to provide for my family and I will need to seek other employment,” said Khadejiah Legrier an H&M Sales Associate.

“Workers deserve access to a dependable schedule so they can manage child care, doctors’ appointments, the ability to budget effectively, and most importantly, their own health and wellbeing, and that is not the case for RWDSU Local 1102 H&M workers in New York City,” said Council Member Brad Lander. “I stand with my City Council colleagues in urging H&M to come to fair terms of employment for its workers and conclude contract negotiations as soon as possible.”

“I cannot understand H&M and its insistence on ‘clopenings’,” said Council Member Karen Koslowitz. “Since when is it a sound business practice to have sleep deprived employees?”

“New York City is known globally for its thriving retail industry, there is no reason for retail workers to be treated poorly, with low wages and no real job security,” said Council Member Ben Kallos. “H&M and CEO Karl-Johann Persson needs to do what is right here and treat their workers with the respect and consideration they deserve. Negotiations and bargaining must be done in good faith as members of RWDSU Local 1102 have repeatedly tried to cooperate and work with the company.”

“H&M workers deserve to be treated with dignity and respect,” said Council Member Fernando Cabrera. “Their labor is the source of H&M’s nearly $170 million in profits in the last quarter. These workers have faithfully done their jobs, agreed to numerous concessions and the company has prospered. It’s time for H&M to bargain in good faith and conclude these contract negotiations with better and fair working conditions for employees.”

“Full-time employees should never have to seek a second or third job to feed their families,” said Council Member Diana Ayala. “Workers deserve quality jobs that provide living wages, benefits, and schedule predictability. I am proud to contribute to the City Council's history of championing workers' right by standing with my colleagues in urging the CEO of H&M to conclude contract negotiations with their employees.”

“All New Yorkers should have access to fair pay and benefits, guaranteed minimum hours, and reasonable schedules. We have an important duty as elected officials to uphold these values and I am proud to stand with the H&M employees as they advocate for fair treatment,” said Council Member Keith Powers.

“When people have to make arrangements for child care, or travel an hour by subway, or take care of relatives who are older or ill, the security provided by a fair contract is the certainty they need to do their jobs well. It’s been months of negotiations. It’s time for H&M management to live up to their own principles and do the right thing. Their workers deserve the security of a predictable work schedule, guaranteed working hours, and access to health benefits. These are not radical demands. They are the bare minimum due to every employee. And we, their elected representatives, will not stop fighting until they get fair terms of employment,” said City Council Member Carlos Menchaca.

“Living wages, fair scheduling and economic security are fundamental rights that should be afforded to every worker, and it is unconscionable that H&M has not yet granted its workers in New York City basic labor protections to provide for their families," said Council Member Margaret S. Chin. "I stand with the thousands of RWDSU Local 1102 H&M workers in their fight for a fair and equitable contract, and urge H&M to take immediate action to give them the respect and dignity they deserve.

H&M should do the right thing. To me, that means finalizing contract negotiations in good faith and on terms that are fair to workers. As the son of a Teamster, I know how important it is to live in a household with financial security and stability. In the City Council, we have a long history of supporting workers’ rights. I urge H&M to do what is right and be fair to their employees,” said Speaker Corey Johnson.

CouncilTop Five Demands of the Company by the Union Include:

The union has proposed a minimum guarantee of between 14 to18 hours per week for all part-time employees who want to work that much. But H&M has said they wish to guarantee ONLY 8 working hours per week. 8 hours barely covers worker’s subway trips, and, above all, because H&M is demanding that workers have open availability Friday through Sunday, they are essentially shutting workers out of a needed second job.

“Clopenings” must stop. The union has proposed a minimum of 10.5 hours rest time between workers closing and opening shifts. It may take a worker hours to get home at night, and then they have to turn around and return early the next morning to open the store. This does not provide for any work‐life balance, which H&M claims as one of its values.

No More Than 5 Consecutive Days Worked:

Many workers lack dental and vision insurance. The union has proposed no‐cost dental and vision insurance for all H&M employees through a Local 1102 RWDSU sponsored plan. The cost to the company is a measly $1 per person per month. H&M refuses to make this extremely minimal investment to provide workers a benefit, which will get them a free pair of glasses and up to $1,500 in dental work per year.

The Committee has proposed an additional, hourly increase of $.50 cents for senior employees who have worked at H&M for 3 years or more. The sad thing is that H&M agrees with us that veteran employees should get this money – however, they do not want to guarantee it in the contract and has demanded the ability to use their “management discretion” to give it to some people that they like, but not others.

The above proposals will cost H&M very little money and the majority of them don’t cost the company a dime. But the company just won’t make even a basic adjustment to the way they do the schedule to improve workers lives, and yet they claim to “believe in people.” 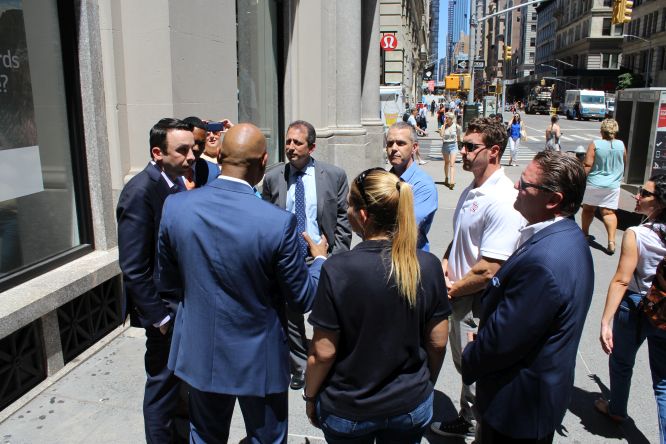