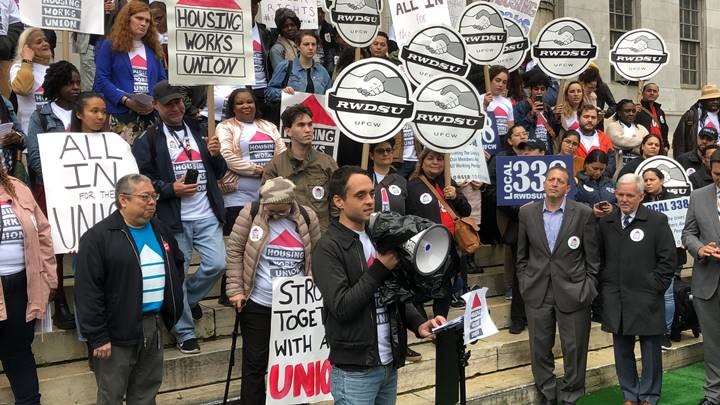 (NEW YORK, NY) – Today, workers across Housing Works’ New York City locations walked off the job to demand the non-profit hear their workplace concerns. Over 100 workers gathered at Brooklyn Borough Hall Plaza to speak out about the working conditions that they face throughout their organization and how they need to see change now. Workers also delivered Unfair Labor Practice charges (ULPs) that they filed this morning with the National Labor Relations Board to their employer (attached). The union has been demanding management sign a neutrality agreement that ensures a fair unionization process free from pressure or coercion of any kind. After the speak-out workers returned to work later that day to make sure their clients’ care was not disrupted.

For months, workers at Housing Works have raised serious concerns about their workplace environment to management. With conditions only worsening, workers believe that union representation is the best way for them to address their concerns. Workers have described unmanageable caseloads, lack of training, discrimination and harassment, and health and safety issues. Workers have raised concerns about pay and benefits, including that their health insurance doesn’t provide adequate coverage for workers transitioning genders. These workplace issues are central not just to employee welfare, but to client care as well.

Maren Hurley, Housing Works – Midtown Manhattan, Reentry Group Facilitators with the SMART Department:
“Our clients are concerned at the high turnover rates and the lack of response from management to both staff and clients on this and other concerns. Working for Housing Works is a constant ethical crisis, not only for our wellbeing but also that of our clients, that can and needs to change. We as reentry service providers recognize that we work in a para-military environment, however we do not consent to endangerment of our safety through mishandling of sexual harassment incidents, exposure to extreme temperatures and retaliation by leadership.”

Adrian Downing-Espinal, Housing Works – Midtown Manhattan, Harm Reduction/Substance Use Councilor:
“It’s demoralizing that an organization with Act Up roots, which is a model for radical organizing would be so against a grass roots union movement. It’s also shocking that it would do business with a ‘union avoidance’ law firm that is the antithesis of progressive values. I came to Housing Works because of the mission and the values of the organization. There is a solid core of workers who are committed to the Housing Works mission, but a lack of will from management to support us in our fight for a union voice.”

Jessica Quashie, Housing Works – Former East New York, Care Navigator:
“There are multiple instances where a Departmental Supervisor has made me feel uncomfortable. For instance, he has misgendered trans and gender-non-conforming colleagues of mine in my presence and frequently discusses workers genitals in relation to their gender. There have been several other unprofessional interactions with him that have made me feel uncomfortable working with him. When I reported these instances to my direct supervisor and asked not to have to interact with him at work, she said that she would take care of it. However, nothing has changed. I feel that a union is necessary at Housing Works to prevent this type of harassment from occurring and to deal with it in a concrete way in instances where it does. Going through my direct supervisor and the HR channels available to us is not working. We need an independent voice for the workers to protect us from abusive supervisors and make clear what kind of conduct is and is not appropriate in the workplace.”

Stuart Appelbaum, President of the Retail, Wholesale and Department Store Union (RWDSU):
“When workers at Housing Works came to our union with their workplace concerns, I was shocked to hear some of the issues they face every day. That’s especially surprising at an organization that so many New Yorkers, myself included, so firmly believe in. It is clear that Housing Works has strayed very far away from its original progressive values in dealing with its workforce, and it’s deeply troubling. When attorneys, care navigators, housing coordinators, maintenance workers and social workers stand shoulder to shoulder they should be heard. The workers at Housing Works have bravely come forward with their stories today and our union will support them every step of the way in their fight to form a union.

“We presumed that a progressive non-profit like Housing Works would respect the right of their workers to join a union. Instead their progressive messaging is just a façade for the truth. Housing Works management is behaving just as anti-union as much of corporate America. In fact, H&M, ZARA and countless others have signed neutrality agreements that go far above and beyond what Housing Works is willing to do. Their refusal to sign a neutrality agreement and their hiring of a ‘union avoidance’ attorney demonstrates their true intent. Workers walked out today to make clear that they need change in their workplace. These workers will not be stopped, and our union will be there with them throughout.”

Housing Works provides housing assistance, and health and wellness care to thousands of New Yorkers living with HIV+/AIDS, as well as raising funds for its work through a number of book, clothing, and furniture retail thrift stores. Workers believe in the mission of the organization and want the same standard of care for employees as it provides for clients.

Workers are urging Housing Works to reach a formal neutrality agreement with the RWDSU so that they can exercise their right to join a union free from pressure or coercion of any kind. Unfortunately, the process overseen by the National Labor Relations Board (NLRB) is all too often used by anti-union employers to keep workers from unionizing. Under the Trump administration, this problem has only gotten worse.

Housing Works’ actions have thus far shown an anti-union animus and a refusal to be neutral despite claiming otherwise. A signed agreement would show real commitment to neutrality and to an orderly and respectful process. Workers are urging the non-profit to live up to its progressive principles and reach such an agreement so that workers can fully exercise their rights.