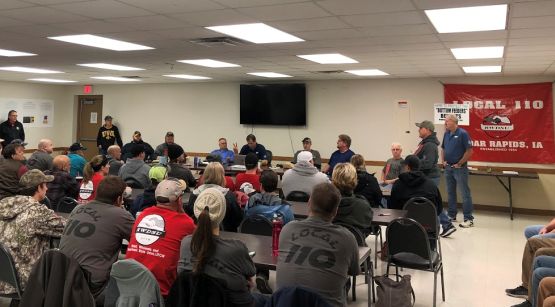 (CEDAR RAPIDS, IA) – Today, Local 110 of the Retail, Wholesale and Department Store Union (RWDSU), announced that over 500 workers at the General Mills processing plant in Cedar Rapids, Iowa have reached a tentative contract agreement with the company. The worker led negotiation committee worked tirelessly to secure a strong tentative agreement that stops the bleed out of their long-held needed benefits package. The committee will recommend workers vote in favor of this agreement. The contract could be ratified as early as Thursday.

“Our membership stood strong in the face of a strike, and I am incredibly proud of our worker-led negotiations committee’s dedication to bringing us back from the brink last night. General Mills moved significantly away from the ‘last, best and final’ offer that would have taken away benefits we’ve had for over 30 years. Our committee unanimously recommends this contract for ratification. I am confident we will all be going to work with the peace of mind of a strong union contract soon,” said Tim Sarver, 37+ year General Mills worker.

“Not a single one of our union members at General Mills ever wanted to walk out of the facility and go on strike. They were pushed to the edge by a company that has for far too long been slowly stripping away their long-held needed benefits. The fact that the company came back to the table immediately following a 99% no vote on a bad contract shows the strength of our members and the impact their work has on the company every day. Even more encouraging, our worker-led negotiations committee was able to get the company to move on four key areas of the contract that members took grave issue with; protecting the outsourcing of their jobs, no maintenance of their benefits, unfair scheduling and wage increases. Now it goes to a vote of the membership,” said Roger Grobstich, Vice President of the Retail, Wholesale and Department Store Union (RWDSU).

The ratification of the General Mills contract is scheduled for Thursday, November 14, 2019. News on the ratification vote and details on the agreement will be shared when available. The negotiations committee expects it will be ratified.

RWDSU represents approximately 520 workers at the General Mills manufacturing facility in contract negotiations. The workers in the bargaining unit handle production and maintenance at the facility. Workers at the facility produce and supply iconic brands such as; the original Cheerios and other flavor varieties including Honey Nut, Frosted and Multi-Grain, and Lucky Charms cereal, as well as fruit snacks including Gushers, Fruit Roll Ups, and Fruit by the Foot, and Betty Crocker ready to spread frosting.

General Mills’ workers are members of Local 110 of the RWDSU, which also represents workers across town at the Quaker Oats facility in Cedar Rapids, Iowa, and at Coles Quality Foods in North Liberty, Iowa. This announcement comes among a string of organizing and contract wins across the country for the RWDSU. The union continues to win organizing campaigns in Right-to-Work states like Iowa, bringing a union voice for workers in previously vehemently anti-union workplaces. The RWDSU has continuously secured strong contracts across the country in food processing and distribution among many other industries. Today’s tentative agreement is another win by members of the RWDSU.