With more than 15 million Americans working in private-sector retail, the industry is one of the fastest-growing employment sectors in the country. Over the next decade, retail will become the second-largest source of new jobs in the U.S. Some retailers are enjoying record profits, but retail workers are facing uncertainty and pressure as their employers try to cut labor costs to the bone.

The RWDSU represents thousands of workers at many large retail chains, including Macy’s, Bloomingdale’s, and H&M. These workers have strong union contracts that give them strong wages and benefits, and mandate fair scheduling practices. But for countless non-union retail workers, the 21st century presents a number of challenges.

Retail workers today routinely suffer unfair and abusive practices including the use of “on-call” shifts, where workers are required to be ready to come in, and are called upon for work at the discretion of management. That means whether or not an employee ends up working, they need to put their life on hold and be ready to work.

Unpredictable scheduling also means many workers fail to receive sufficent hours they need to support themselves and their families. And retail workers with “on-call” shifts can’t arrange to work a second job since they don’t know their schedules and always need to be available.

Commissions were once the lifeblood of many retail jobs, and still are when they are protected by union contracts. They encourage good customer service, and help employers’ bottom line by moving product out the door. But retail workers are hurting as employers have found new ways cut back commissions that are supposed to supplement low base pay. They are cutting commission rates, and increasing waiting periods required before receiving commission pay, and allowing customers unreasonable amounts of time to return merchandise and cancel out commissions.

Stores have also created tiered commission systems, where employees are paid a smaller commission on a first level of sales, with increased commission pay on a second level. For example, an employee may be paid one percent commission on their first $1,000 worth of sales, with an increase to three percent on sales after that. But employers are purposefully overstaffing their sales floors to keep workers from reaching those higher tiers. In addition, the overstaffing creates competition between employees, making it more difficult for all workers to earn commission pay.

Work hard and you can get ahead, says the old adage. Unfortunately, it’s often not true in retail. Survey results showed that retail workers generally received small raises in their first couple of years of employment, but little to nothing after that. Workers who had been at their job for over five years actually earned slightly less than workers with only 3-5 years on the job.

Rather than offer good workers opportunities for advancement, retail employers have embraced a high-turnover workforce as a means to keep labor costs lower. Without a union contract mandating raises, many retail workers are stuck in low-wage, go-nowhere jobs until they find a better opportunity elsewhere.

Retail workers are facing more challenges in the workplace than ever before. But when they stand together, they can push back against abusive practices and make retail jobs good jobs that build better lives. 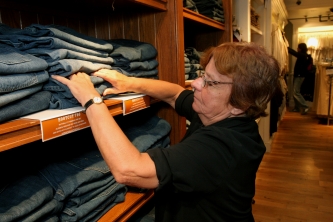