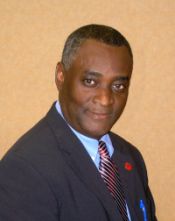 Joseph Dorismond is an immigrant from Haiti.  After holding several jobs at a hotel in Florida, he moved to the New York area to work for the RWDSU. In 1990, Dorismond began in the union's mailroom, and then became a union organizer. He worked on a number of organizing campaigns across the U.S., including bringing a voice to poultry workers in the south, and spearheading the New York City supermarket deliverymen campaign that resulted in a multimillion dollar lawsuit settlement on behalf of exploited workers. Along with working on organizing campaigns across the country, Dorismond has helped train RWDSU organizers at numerous locals.

In 2002, Dorismond was appointed to the RWDSU's Advisory Council.   He has directed the ground operation for the union's historic car wash campaign, which has seen the first car wash workers east of Los Angeles win union contracts.   As the RWDSU's Recorder, Dorismond coordinates the union's organizing staff throughout the country.  He is a member of RWDSU Local 108.

Dorismond has also been active in the Haitian community. He produced a radio show for 13 years that helped educate the Haitian population across the U.S. about worker and civil rights issues.