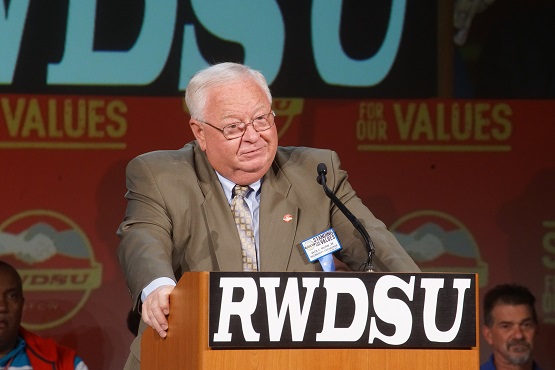 Jack Wurm became the RWDSU secretary-treasurer in 2003, and was re-elected in 2006, 2010, and 2014. Wurm first became a member of the RWDSU in 1969 when he began working as a driver at Butternut Bread. Over the next ten years he served as steward, chief steward and secretary-treasurer of RWDSU Local 386 in Grand Rapids, MI. In 1980 he became a business agent for the local. In 1989 he was appointed an RWDSU Representative and in 1994 he was first elected as an RWDSU vice president.

Before becoming secretary-treasurer, Wurm served the union as midwest regional director. He also helped lead contract negotiations for a number of RWDSU locals and was responsible for coordinating the union’s participation in the annual Union Industries Show. Wurm also serves as a vice president of the United Food and Commercial Workers.

For the last five Democratic Conventions, Wurm has served as a delegate from Michigan. He also served on the transition committee and Inauguration committee for Jennifer Granholm, the former Governor of Michigan.