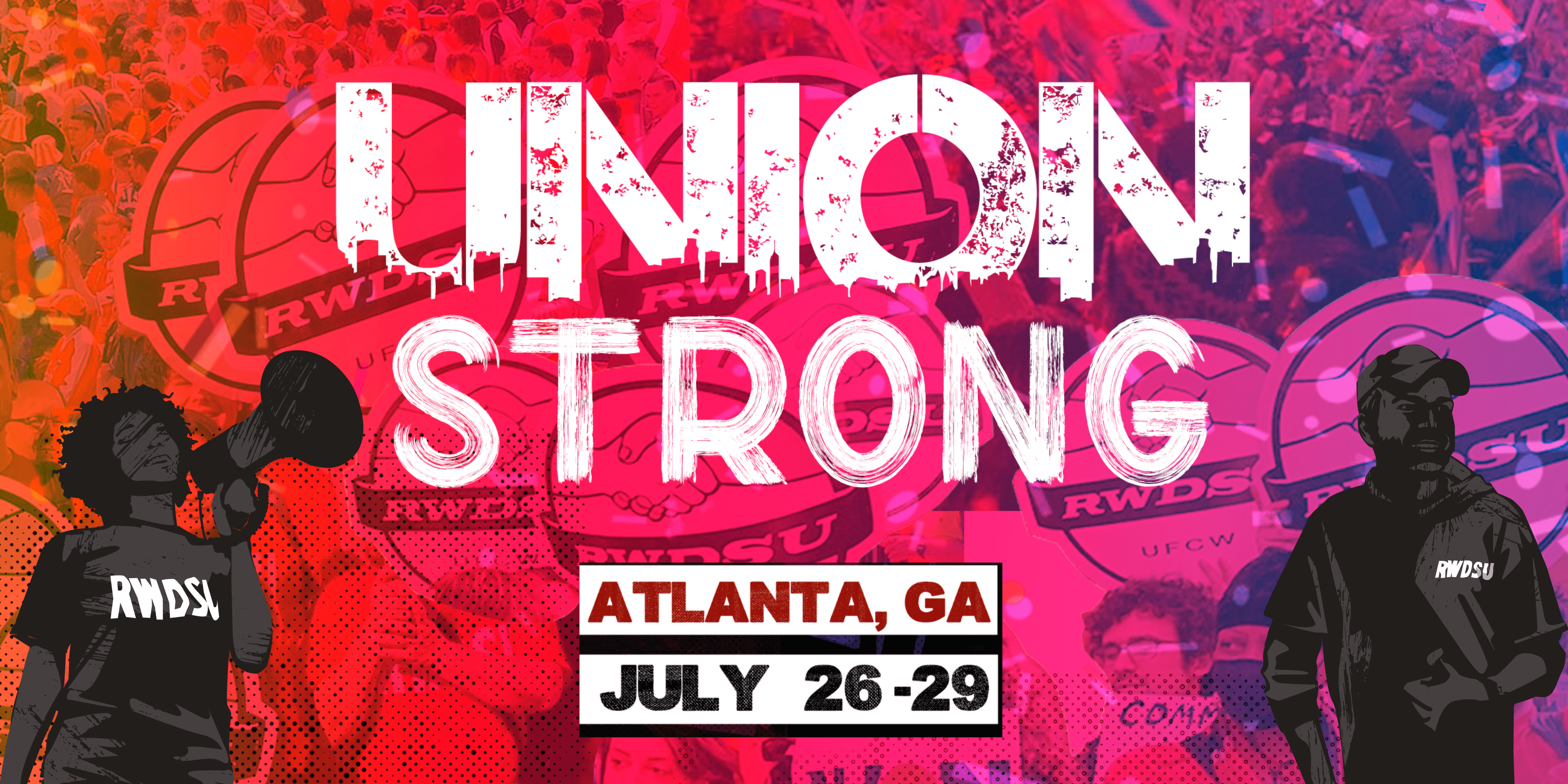 RWDSU members came from around the country and across the globe; hundreds of delegates, alternates, and guests arrived here in Atlanta, Georgia to join together for the 24th RWDSU Quadrennial Convention. As attendees registered yesterday and gathered in the days leading up to the convention – it was an exciting time; the first opportunity many of us have had since early 2020 to join together in person as a union.

The RWDSU Convention, which begins this morning at 9 am, is the only time every four years when we come together, review the progress we’ve made and the challenges we’ve faced, and set the course of our union for the future.

On Monday, as attendees registered for the convention, dozens of RWDSU volunteers helped assemble delegate bags, including materials such as health and safety materials, the political update, the RWDSU Constitution, and the red RWDSU painter’s cap. Be sure to bring your red hat to Thursday’s sessions, so you can proudly show off your RWDSU colors in the panoramic convention group photo.

Tuesday, July 26, 2022 - Convention Day One Focused on Our Challenges, Achievements, and Goals

The first day of the RWDSU Convention showcased words, action, and music of inspiration, as the union looked back at the unprecedented challenges of the past four years, the union’s accomplishments in fighting for working people and helping to ignite a reinvigorated national labor movement, and the path forward as the RWDSU continues to lead the charge toward a new wave of activism.

Opening with a rousing set by social activist singers the Fruit of Labor from North Carolina, a welcome by Atlanta Mayor André Dickens, and the RWDSU Convention video, the hundreds of delegates, alternates, and guests in the convention hall were fired up, ready for action, and ready to organize to make our union stronger.

RWDSU President Stuart Appelbaum, Secretary-Treasurer Robert Layng, Jr., and Recorder Joseph Dorismond were elected yesterday morning to serve new four-year terms as the leadership team for the union. The Nominations and Election Committee, headed by retiring RWDSU Regional Director Rick Marshall, conducted the nominations and vote during the election, which resulted in a vote for President Appelbaum and Secretary-Treasurer Layng. Recorder Dorismond was appointed by acclimation. The newly elected officers thanked the delegates for their confidence and support, and pledged to continue working to build a stronger RWDSU.

RWDSU delegates, alternates, and guests discussed and were joined by many speakers who addressed the issues of collective bargaining, political action, and global solidarity. New York Attorney General Tish James opened up the third day of our convention with an electrifying address. A video recorded by Kamala Harris addressing the RWDSU convention also played, and we were joined by many UFCW leaders to discuss the connection between our two unions. Finally, we donned our red RWDSU caps and took the convention group photo!

And with that, the RWDSU 24th Quadrennial Convention has adjourned! What an exciting four days that have inspired our entire union family and made us hopeful for the future of our union. Today, we focused on our union’s response to COVID-19 and health and safety work, honoring all the members we’ve lost over the past four years, many of them to COVID-19. We heard an inspiring speech from AFL CIO President Liz Shuler, who also swore in the newly elected Executive Board and Advisory Council. We also received an emotional speech from a treasured member of our union family – Secretary-Treasurer Emeritus Jack Wurm, who’s been a member for over 50 years, and were electrified by Georgians Linqua Franca and Rev. Raphael Warnock.