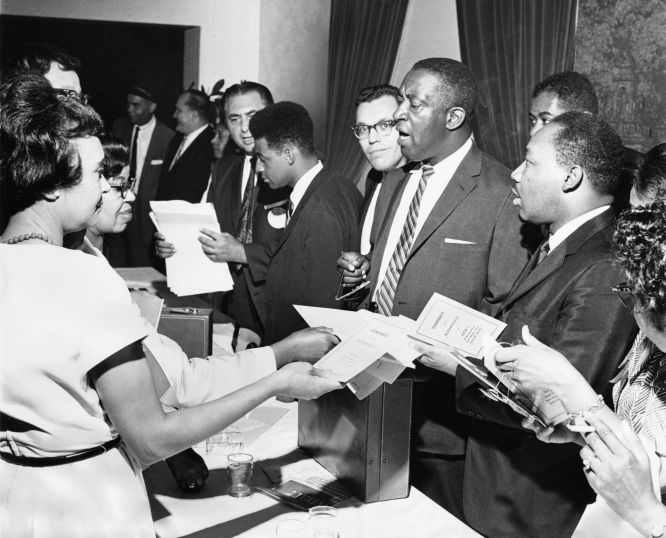 We take special pride that, in 1968, the RWDSU was the first union anywhere to negotiate a contract guaranteeing Dr. King's birthday as a paid holiday.

The RWDSU was among the earliest supporters of Dr. King's grassroots drive to challenge racial injustice in the South.

In Chicago during the 1960s, RWDSU provided an important forum for Dr. King to speak out against poverty in America's cities.  Later, thousands of RWDSU members stood shoulder to shoulder with other Civil Rights Activists during the historic 1963 March on Washington.

Dr. King saw the Civil Rights struggle and the labor movement as closely linked.  He was a constant ally of Union Activists and most have forgotten that Dr. King was in Tennessee to support a Living Wage for Sanitation Strikers on that terrible April day in 1968 when he was slain at the age of 39.

Dr. King spoke about the importance of the Labor Movement on many occasions.

"Our needs are identical with Labor's needs: decent wages, fair working conditions, livable housing, old age security, and health and welfare measures, conditions in which families can grow, have education for their children, and respect in the community. That is why negroes support Labor's demands and fight laws which curb Labor. That is why the Labor-hater and the Labor-baiter is virtually always a twin-headed creature spewing anti-negro epithets from one mouth and anti-labor propaganda from the other mouth," Dr. King said in a speech in 1961.

In reflecting on the life and work of Dr. King, the RWDSU recognizes the fight he began is not over until equality for all is a reality, and it is up to our generation of RWDSU members to complete his mission.

His spirit lives on in the Black Lives Matter movement, the labor movement, and everywhere people seek to create a more just and equal society for all of us.