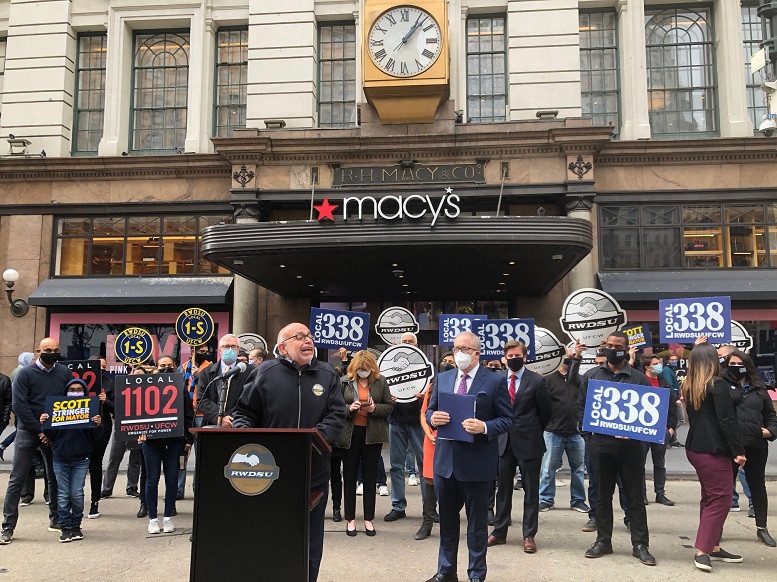 RWDSU President Stuart Appelbaum said: “RWDSU members put their lives on the line to keep this city running. From grocery stores to pharmacies to retail to food production, our essential workers took care of us all during the height of the pandemic -  but continue to be ignored, underpaid, and overworked. That’s why now more than ever, we need a progressive leader in City Hall who will protect and advance the rights of working people. From combatting wage theft to fighting for robust workplace safety protections to championing paid family leave, Scott has always stood up for the city’s most vulnerable and marginalized workers. As a native son of Washington Heights, Scott knows that working people are the lifeblood of this city’s economy. Scott understands what we need for a just economic recovery and he has the values, the experience and the know-how to get it done. That’s why RWDSU is ready to get to work to elect Scott Stringer as the next Mayor of New York City.”

Comptroller Scott Stringer said: “RWDSU is a fierce advocate for thousands of working families across New York City and around the country, and I am proud to have their support in this fight for our future. There is no recovery for New York City without guaranteeing the health, safety, and economic opportunity of the frontline workers that sustained us during the darkest days of the pandemic. We cannot go back to business as usual and reopen our economy the way  we closed it. We need to fight for substantial employee benefits and hold employers accountable for worker safety - because no one should have to choose between their job and their health. We need to reimagine economic development in New York City to strengthen communities and create good-paying jobs. We need to create real pathways of opportunity to the middle-class, with affordable housing, education and job training programs that are actually affordable. These are the values I share with the hardworking members of the RWDSU - and I am proud to stand with them to make this city a fairer place to live, work and raise a family.”

RWDSU’s endorsement follows support for the Stringer campaign from prominent leaders who represent the vanguard of New York City’s progressive movement, including:

Scott Stringer grew up in Washington Heights in the 1970s. He attended P.S. 152 on Nagle Avenue and I.S. 52 on Academy Street. He graduated from John F. Kennedy High School in Marble Hill and John Jay College of Criminal Justice in Manhattan, a CUNY school.

Stringer was elected City Comptroller in 2013. Prior to serving as Comptroller, he was Manhattan Borough President from 2006 to 2013 and represented the Upper West Side in the New York State Assembly from 1993 to 2005. He and his wife, Elyse Buxbaum, live in Manhattan with their two children, Max and Miles.