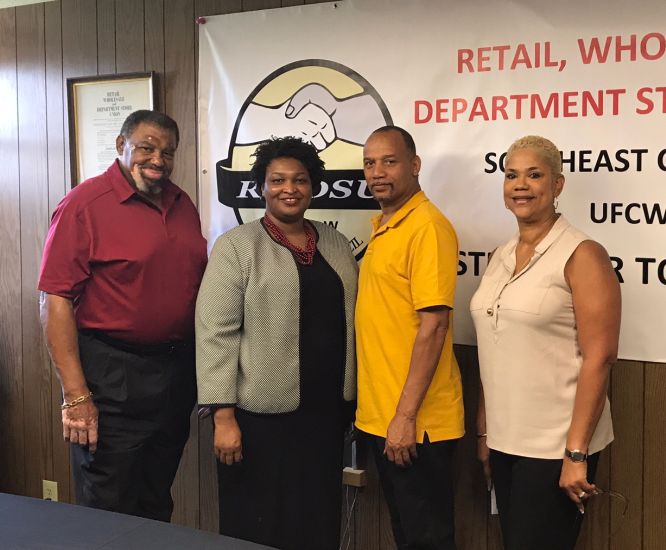 Edgar Fields, President of the Southeast Council of the Retail, Wholesale and Department Store Union
(RWDSU), whose membership includes 10,000 men and women in Georgia, announced the union’s
endorsement of Stacey Abrams in her bid to be the next Governor of Georgia. This endorsement comes
just days after the RWDSU announced its endorsement of Ceasar Mitchell for Atlanta Mayor and on the
heels of the union’s ground support for Jon Ossoff in Georgia’s 6th Congressional District race earlier
this year.

“Stacey Abrams has a real plan to ensure Georgians don’t just survive but thrive across our state,” said Edgar Fields, President of the Southeast Council of the Retail, Wholesale & Department Store Union (RWDSU). “Any candidate who believes equality will build prosperity is a candidate who we know will fight for working people in Georgia. Stacey has our full support in her bid to be the next Governor – she embodies the leading voice we need at this critical juncture in our state’s history – and the RWDSU will work tirelessly support her candidacy.”

“I am proud to have the support of RWDSU and the workers they represent across Georgia. The ability to earn a fair wage and support your family is the bedrock of building a strong economy in our state. As governor, I am committed to ensuring that workers in every single county have the ability to thrive,” said Stacey Abrams, Georgia Gubernatorial Candidate.

Read more about it at the Atlanta Journal-Constitution: