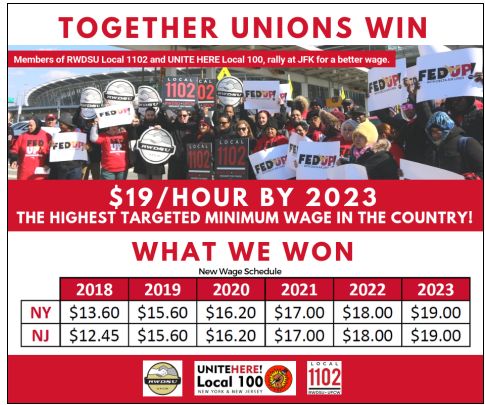 The long-delayed vote, which was strongly opposed by the airline industry, would steadily increase airline catering and airport concessions workers base wages, many of whom were receiving the respective states’ minimum wages, to $19 per hour by 2023. RWDSU and UNITE HERE represent over 7,600 workers at LaGuardia, JFK and Newark airports, but implementation of the proposal could impact tens of thousands of workers at area airports in the largest sector-based minimum wage increase in the country. Workers at Port Authority airports will start seeing these pay increases on November 1.

“Today, the Port Authority of New York and New Jersey increased wages for tens of thousands of airline catering and concessions workers. This increase will categorically change the lives of the hard-working people who make our airports run every day and will begin November 1, despite strong opposition from the airline industry. Service workers at LaGuardia, JFK and Newark Liberty, are key to the success of our region’s airports. The new wage floor of $19 per hour by 2023 shows tens of thousands of workers that they are valued by the people of New York and New Jersey and will allow hard working men and women to finally support themselves and their families with their airport job. Crucially, we were happy to see that the Port Authority’s resolution covers all airport service workers. This remedies an oversight in the previous policy, passed in 2014, which did not include airline catering workers. We thank the Port Authority for approving this resolution unanimously, and New York Governor Andrew Cuomo and New Jersey Governor Phil Murphy for their support.”

“I have been a driver for the airline catering company Gate Gourmet at La Guardia airport for 26 years. Despite my hard work and dedication, I don’t earn enough to support my family. To make ends meet, I pick up extra shifts and overtime every week, but this means that I work long hours that keep me from being with my family. Raising the minimum wage at the airport to $19/hour will allow me and my co-workers to earn enough to support our families,” said Franz Vieux, a RWDSU Local 1102 Member who works for Gate Gourmet at LaGuardia Airport.

“This is a moment that I and many other airport workers in New York and New Jersey have spent years fighting for,” said Nelly Etienne, a UNITE HERE Local 100 member who works for United Airlines in the airline’s Newark Airport catering kitchen. “For me, a raise to $19 per hour will mean that I can provide a better life for my four children. We’ll finally be able to move into a home of our own.”

New York State AFL-CIO President Mario Cilento said, “This is what happens when working men and women stand together and speak with one voice. I’m proud to stand shoulder to shoulder with our brothers and sisters of RWDSU, UNITE HERE Local 100 and RWDSU Local 1102 who never wavered in their fight for a fair day’s pay for an honest day’s work. This is just the beginning. The Labor Movement remains committed to making sure workers continue to have an opportunity for a better life for themselves and their families.”

“When working people come together we win together,” said Vincent Alvarez, President of the New York City Central Labor Council, AFL-CIO. “Increasing wages for thousands of workers at our area airports was a challenging undertaking, and together the RWDSU, UNITE HERE Local 100, and RWDSU Local 1102 closed a glaring gap in the 2014 wage order for workers in catering and concessions. Organized Labor and workers are coming together to improve their lives, and most importantly 7,600 union workers and tens of thousands of workers across two states will finally earn a fair wage for their work.”