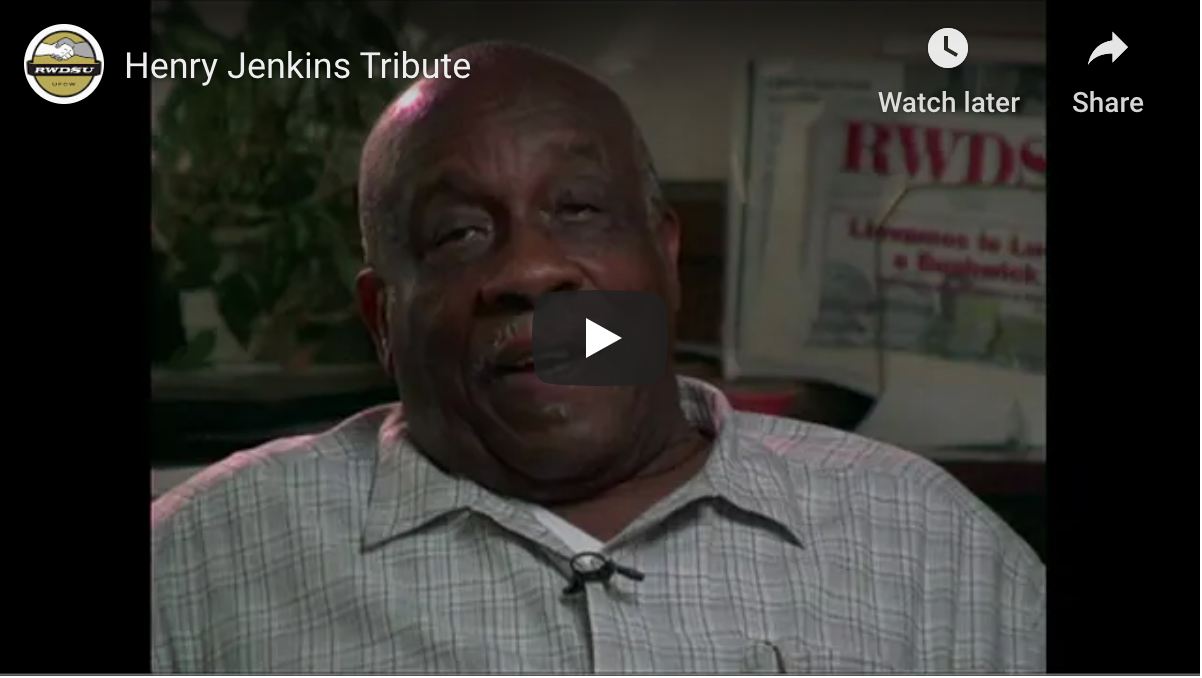 Henry Jenkins, who passed in November, 2011, left behind a vibrant legacy of helping countless thousands of working families build better lives for themselves. His life’s work spans decades and influenced generations in the south. And while Jenkins found his home in the labor movement which he loved, his commitment to justice went beyond even his union activism, embracing the civil rights movement that changed America forever.

It is no exaggeration to say that Henry Jenkins put his life at risk to help others as he fought for economic justice in the south in the 1960s and beyond.

His lifetime of commitment to the labor movement began when Jenkins was just a teenager when he went to work at the Ward Baking Company in Birmingham, Alabama in 1948. There he helped make breads and cakes in an environment so hot that at the end of the day there wasn’t a dry spot on his body. It was hard work, but it was also a union job, and Jenkins quickly came to appreciate the difference it made – a difference that was especially poignant in the deep south still caught in the chokehold of Jim Crow and segregation.

Jenkins’ membership in the RWDSU helped ensure that he was entitled to fair wages, good benefits, and vacation time, things that many other southern workers – African American or otherwise – didn’t enjoy at the time. Jenkins has said that most importantly, union membership brought equality and fair treatment on the job. It was an equality that he and his African-American co-workers had yet to enjoy outside of work, during an era where disenfranchisement was still the norm.

Jenkins immediately got involved in the union and became a shop steward, and then moved on to become an organizer, spreading the seed of union activism throughout Alabama. During the time Jenkins and his fellow organizers were bringing an RWDSU voice to workers in Selma, Montgomery, and other cities and towns throughout the south, the civil rights movement was blossoming as a new generation of Americans declared they’d had enough of the old ways. And the burgeoning civil rights movement and the labor movement often crossed paths. Dr. Martin Luther King, Jr., viewed the labor movement as an important component of civil justice and racial equality, and he worked side by side with unionists in the South. In 1965, Jenkins himself personally delivered tents and other supplies to marchers along the route of the landmark Selma to Montgomery marches that proved to be a pivotal event in the civil rights movement.

Fighting for Change, Never Backing Down

The violence and intimidation that sadly marked the civil rights movement also crossed over into the labor activism in the south that Jenkins had dedicated himself to. In 1964, while driving through Montgomery to speak with workers at Whitfield Foods who wanted to join the RWDSU, Jenkins’ 1962 Ford came under fire, and he found himself with a bullet hole in his windshield. He had been targeted by the Klan and harassed by crooked police officers. He received threatening phone calls at home in the middle of the night, from the same types of scared people who saw that their world of inequality, segregation, and bigotry was coming to end.

But like the civil rights activists who would change the South, Jenkins never gave up and he never backed down. His courage helped bring a union voice to thousands of workers in Alabama who needed a union to help them stand up for themselves. In 1979, Jenkins was elected president of the Alabama and Mid-South Council, serving until earlier this year when he announced his retirement. Jenkins also served as an RWDSU Vice-President and Regional Director, and as a UFCW International Vice President.

During Jenkins’ tenure as council president, the RWDSU continued to bring a voice to working people in the south, extending far beyond Birmingham, Alabama, where Jenkins started out. Thanks to a culture of activism and organizing that was the hallmark of Jenkins’ leadership, the Alabama and Mid-South Council flourished.

Jenkins’ tenure was characterized by a growth in RWDSU membership for poultry workers, who work demanding jobs in sometimes brutal conditions. As the poultry industry has grown and changed, so have the need for worker protections, and the RWDSU was there to bring a union voice where it was needed most. Jenkins became an outspoken advocate for the rights of immigrant workers. He likened the terrible treatment of immigrant workers to the viscous bigotry suffered by African Americans and fought for their equal treatment.

Jenkins never really stopped working – up until his recent illness, he could still be spotted at the Alabama and Mid-South Council offices, offering advice and assistance to the new generation of union activists who he had inspired. While he will not be given the opportunity to enjoy a lengthy retirement, those who knew him say he was truly happiest doing what he had spent most of his life doing: helping bring tremendous positive change to the lives of working people.